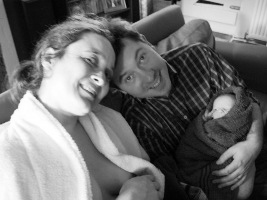 My birth story seems to begin a week or two before my labour started. I had been planning a homebirth right from the beginning of my pregnancy – I had always felt that pregnancy was not an illness and birth was a natural process, not necessarily something in need of medical intervention. I considered myself very lucky to be in a region where homebirth was relatively well-supported on the NHS (5% rate). I was fit, healthy and ticked all the boxes – and continued to do so for the next 38 weeks.

Then I had a few days of raised blood pressure, requiring a day in the hospital for monitoring and CTG. And a scan “just to double-check the presentation”, a stupid formality I believed at the time. But no, it turned out he really was breech. I was no longer the model homebirth candidate – I had a become an “obstetric problem”, a primip with an “unproven pelvis” and no choice but to have an elective section at 39 weeks.

I didn’t like the thought of that and spent the next week speaking to obstetricians, hospital midwives, community midwives and independent midwives – receiving a very different message from each group, most of which were horror-stories concerning “trapped heads”, prolapsed cords and nuchal arms, as well as more general warnings that a vaginal delivery would risk damaging my baby and that I should opt for the section. To her credit, my consultant did not try to persuade me to go for the elective – but did strongly recommend “an epidural to stop me pushing and forceps to slow down the delivery”, a recommendation that made the section sound much less unappealing to me and one that was contraindicated in some of the other information I was reading.

I made the point that they should not be withdrawing my homebirth and everyone agreed that that could/would not happen. BUT my community midwives told me they had very little breech experience and would be very worried about being present. It didn’t exactly fill me with confidence about fighting for my rights, I felt this was now about safety.

We considered various turning options but somewhat half-heartedly. My gut feeling was that he was breech for a reason and wanted to stay that way. I didn’t like the thought of ECV – it seemed too forced. I had a moxibustion treatment with my acupuncturist and I don’t think my baby had ever felt so still! But interestingly he felt different afterwards, kicking in a different way so I believe he shifted. The two scans I had suggested that he had switched from flexed breech to extended breech – the consultant said this was highly unlikely at such late gestation (and that the first scan was inferior quality so misleading) but, again, gut feeling was telling me that he’d changed to a position more conducive to labour.

Once I’d read the RCOG guidelines, the results of the Hannah et al. (2000) trial – and the criticisms which followed – and books on breech birth by Jane Evans and Benna Waites I started to feel that the horror stories I was being force-fed were perhaps not the opinions of professionals with much experience of breech birth (as distinct from breech delivery). But I was also worried that maybe the positive stories of breech birth were a little too “rose-tinted” – as suggested by my consultant.

An invaluable 3-hour consultancy with Mary Cronk dispelled that worry and we started to understand the mechanics of how a breech birth proceeds when not interfered with. We came away feeling that not only was homebirth still my preference, it also felt the safest option provided that we were able to find an experienced midwife. While by this point I had been offered experienced midwife cover in the hospital, I found it hard to trust that staffing levels would guarantee continuous care from these experienced midwives and allow for my labour to progress smoothly. It felt like a reasonable back-up plan but still not my preference.

I spent the next 30 hours desperately trying to find an independent midwife with breech experience, and preferably Mary’s recommendation, who could take me on at short notice. Eventually, and having spoken to many wonderfully helpful – but unavailable – IMs, we found Lynn. Little did we realise how short this notice really was – following a few contractions which woke me up during the night, I was in established labour within about 9 hours of confirming our midwife. I was in denial for a while, I couldn’t believe it was such a close call, but eventually had to admit that the contractions had been regular for a couple of hours and we needed to phone Lynn and bring our meeting time forward to NOW!

The first stage lasted about 6 hours. I started off in the bath while my husband inflated and filled the birth pool in the kitchen. Transferring to the pool felt wonderful with its additional water and soft sides. Lynn was on the way, albeit temporarily delayed on the M25 which had us worried for a bit. We’d never met but, thanks to Mary’s recommendation, I knew I could trust her – something that I feel was key to the whole birth progressing so well – and I felt such an overwhelming sense of calm once she arrived at our house. Our backup midwife, Angela, (who I did know from previous NCT classes) arrived soon after.

Within about an hour of their arrival, I started to feel the contractions intensify and sitting in the pool was no longer comfortable. I needed to be on my knees and it was around this point that I think my waters went.
Second stage was starting and soon I would know whether there was any truth in the scaremongering stories of how damaged my baby would be. If I have any regrets it was that I had let these thoughts be planted in my head and never quite let go of them until he was in my arms. In fact, this thought was so uppermost in my mind that I genuinely forgot that asking for pain-relief was ever an option.

The midwives helped me out of the pool into a kneeling position leaning on my husband. I had forgotten whether I was supposed to be “praying” like a Christian or a Muslim at this point(!) but I think it was a good thing and allowed me to go with what felt right instead – this tended to be something in between and eventually with my right knee raised. Having been told how quick a breech birth tended to be, the next couple of hours felt very long – there were times when I felt very worried that things weren’t progressing and that Lynn would say I needed to transfer. What felt to me like a little bottom hanging out of me was actually only peeping out occasionally. But finally he was “fully rumped” (my vocabulary has increased no end in the last few weeks…) and literally dropped out of me alarmingly quickly during the next two contractions – the potential “trapped head” beautifully released by Lynn’s advice to lean right forwards to widen my pelvis.

He was not breathing initially – luckily I was blissfully unaware at the time – but Lynn encouraged me to cuddle and rub him. No formal resuscitation was needed although I’d been aware it was common in breech births. His initial APGAR was 6 which horrified me until Lynn (and later
Mary) reassured me that it was high for a breech baby. It increased to 10 within a few minutes. He didn’t cry much then or in the following days, instead making lots of rooting noises – coupled with amazingly strong head movements. We had lots of skin-to-skin contact immediately and over the next few days/weeks, feeding whenever he wanted and cosleeping to make this easier. He’s found his voice more now but is still usually a delightfully contented, but expressive, baby and I can’t help but attribute this to the calm and relaxed manner in which he entered the world. With Lynn and Angela helping me stay so relaxed, his birth was almost an anti-climax after the stressful lead up to it (I was still ranting about hospital policies minutes after he was born!) but obviously I wouldn’t want it any other way.

I continued with Lynn and Angela’s post-natal care for the following month and it shocked me how much I looked forward to their visits and trusted their advice, compared with my usual need to check research papers following conversations with my consultant and community midwives. Next time I book Lynn/Angela it will definitely be earlier than 39 weeks into my pregnancy…..