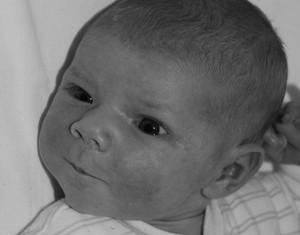 From even before I was pregnant I felt very strongly that I wanted the birth of my first child to be at home. In part this was because of a dislike of hospitals but mostly because the evidence on safe births suggested very strongly to me that for a normal pregnancy with no complications then this would be the safest and importantly happiest place to give birth.

I had considered using an independent midwife when I found I was pregnant, but this feeling became much stronger when I found that my NHS hospital of choice would not support homebirths outside of a particular postcode. Even before my first meeting with Angela I got a very strong feeling that she would be the right choice for me as even on the first phone call we discussed my reasons for wanting a home birth which complemented very well her reasons for practicing as an independent midwife. On first meeting her I knew she was the right midwife for me and just hoped my due date would fit well around all her other clients.

Itâ€™s hard to talk about Astriâ€™s birth as an event of one day (which it wasnâ€™t!) but rather I felt that it was a process that had started all those months ago when me and my husband first met Angela. Thereâ€™s something very special about having the opportunity to be able to talk openly about everything both physical and emotional that the birth of a child brings. It leads to a very trusting and professional relationship, where I felt that nothing on my part was too insignificant to be discussed.Â  So after all those long months the due date rapidly approachedâ€¦.. and then passed! Whilst feeling very impatient for things to kick off it was also wonderfully stress-relieving to know that Angela was more than happy to wait things out as long as both me and the baby showed no signs of poor health.

Iâ€™d been feeling very run down with an ear infection in the last few weeks of pregnancy, but on the Friday, eleven days after the due date, something changed. I felt that rush of energy; not enough to spring clean the house (thatâ€™s so not me) but enough to go out for lunch with one of my friends. By Friday evening the first quivers of contractions had begun and Graeme and I sat there knowing that this would be the last night with just the two of us for quite a while.

Angela was due to visit for a check up on the Saturday morning, so it was great to see her then as she gave some great advice on how to manage the coming day. As contractions grew stronger during the day I did one of her suggestions and baked a cake â€“ good to stand up and keep the mind occupied.Â  At 11pm we called Angela back as I thought things were moving on. Of course theyâ€™re never as far gone as you think and we had a little way to go yet. When Angela arrived I was sat for comfort on the toilet, with my head in the sink feeling very queezy. I remember Angela asking me if I could pee on a stick and I remember thinking â€˜stuff your ****** sticks, canâ€™t you see Iâ€™m in labour!â€™ but all I might have said was â€¦urgh.

Throughout that long night Angela was with us, constantly monitoring me, but more importantly as a wonderful reassuring presence to me and Graeme. Everything went smoothly, if slowly and painfully, until suddenly it didnâ€™t. Angela had been monitoring the babyâ€™s heart rate and unexpectedly this began to show indications of distress at around 5:00 am. At this point we decided that a transfer to hospital was the safest course of action. Actually I say the decision was made then, but in reality we had made that decision months ago when we had discussed possible reasons for transfer. So I in know way felt that I was forced into a decision or worse that the decision was taken away from me; rather it felt like just a reminder of what we had agreed a long time ago when everyone was rational and clear headed.

Angela knew exactly how to arrange for the ambulance and paramedics to arrive, explaining to them all the details so the hospital was well prepared for my arrival. Angela came with us and was there just ahead of the ambulance and with us in the delivery room. Everything was so calm, not the panic I imagined.Â  At this point Angela had to hand over direct midwifery care to the hospital midwives, but stayed with us offering such great emotional support to us both. Because the heart-rate was still causing some concern it was decided that some intervention might be necessary, but somehow on hearing that I found the final strength to give that final push and out â€˜poppedâ€™ my darling daughter. The paediatrician was on hand and very rapidly he and Darryl the midwife confirmed that Astri was doing fine. It turned out that the umbilical cord had wrapped around her neck during labour and this had caused the distress. Just one of those things that can happen, whether at home or hospital. All through this I was really impressed by the mutual professional respect my two midwives showed each other and this made for a very comfortable atmosphere.

So should there be another baby would I opt for a home birth? Definitely. I felt I had the best of both worlds; the comfort and security of my own home and then medical attention (which fortunately turned out not to be necessary) at the end. It goes to show that your birth plan is important, but not something to be set in stone. What was most important to me was knowing that Angela was there throughout to act on my behalf if necessary and supporting me at all stages. But Astriâ€™s birth is really the start of the storyâ€¦